Molly Hacker Is Too Picky! An Interview with Lisette Brodey!

I'm pleased to have author Lisette Brodey on my blog today with an interview. She's a prolific writer who pens stories with strong lead characters and interesting plots. Her book Molly Hacker Is Too Picky! is an enjoyable read. Molly is an independent, down-to-earth woman who's afraid to give her heart to the wrong man after having her heart broken. That's the core story but there's so much more that Lisette puts Molly (and the reader) through. It's an adventure that will have you smiling, laughing, and feeling Molly's angst. 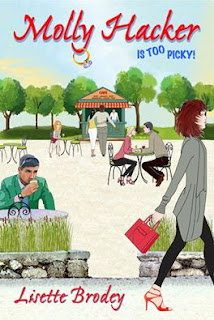 
On with the interview...

Molly's a fun, engaging character who's brutally honest - mostly with herself. When you were inspired to write her story did you already have her personality nailed down or did she surprise you as you went along?

I knew she was a strong-willed, funny, and loving woman who wasn't going to settle for Mr. Wrong just because others referred to her as picky. I also knew she was steadfast in her pursuit of finding true love and refused to be swayed by popular (or in Molly's eyes, unpopular) opinion. That was the starting point. Almost immediately, Molly revealed herself as over-analytical and self-deprecating, not only in her quest to find love, but also in her everyday life.

Dating isn't easy. It's especially hard when well-intentioned friends/family think they have the perfect person picked out for you. Can you tease us with a little bit about one of Molly's dates (either about the person they thought would be perfect or about the date itself?)

When Molly Hacker Is Too Picky! begins, Molly's days of allowing people to set her up are long over, but that doesn't stop the meddlesome town socialite, Naomi Hall-Benchley (the "she-Devil"), from trying. As Molly is systematically thwarting Naomi's efforts, she meets Alan T. Cressman. Molly finds him attractive, yet a bit socially awkward. She's also consumed by the fact that he uses his middle initial every time he says his own name. She soon learns he does so to distinguish himself from his father, Alan C. Cressman, but she's still unsure about him. When Alan brings flowers to Molly's office at the Swansea Herald, she happily receives them, but isn't too happy when her co-worker and friend points out that they came directly from a funeral home. Stalwart in her efforts to give him a chance, Molly is determined to get past the flower blunder. But what happens next is an entirely different story!

There were some twists and turns in Molly's story. Did you know those ahead of time?

As with most of my novels, I know how the book will end, but I don't know all of the nuances and twists. I remember one particular day when I was writing and one of Molly's suitors gave her some news that shocked me. I never saw it coming. I thought to myself, 'Wow, that's interesting,' and I kept on writing. I do love it when characters throw curveballs because that's exactly what real life does. Also, there was one character who was created just to bring levity to one scene yet ended up being a far more important part of the story.

Despite the lighthearted nature of the book, it wasn't an easy one to write. I kept meticulous notes regarding the time frame of the events. When one woman has four romantic interests at once, things can get complicated fast - for both the author and the characters. Looking back now, I probably couldn't tell you precisely which twists were planned and which were not.

Molly has a great friend, Randy, who's an awesome secondary character. He keeps her sane throughout the year-long romp to find Mr. Right. Would you like to say a few words about him?

Randy is a gay man who believes he also has found his Mr. Right, Kyle. Hilarious and every bit as snarky as Molly, Randy is also a deeply caring friend. He would do anything for Molly (whom he calls "Molly Rose"). What makes their friendship even more important is that Molly has decided to keep her girlfriends out of the romantic loop because their "helping hands" helped her to lose the man she was once engaged to. Determined not to let past mistakes repeat themselves, she chooses Randy as her sole confidant while he confides the ups and downs of his relationship with Kyle.

Could you share a teaser about the end without giving anything away?

Molly Hacker Is Too Picky! takes the reader on a year-long romp through Molly's mind and a joyride through her life. Her dating life, town secrets, a group of quirky, crazy characters, and Naomi's machinations collide head-on at a holiday gala that will change the social landscape of Swansea forever.

As the New Year rolls in, Molly gets earth-shattering news. Can she go on? Will life ever return to abnormal again?


If you'd like to read Molly Hacker Is Too Picky! it's on sale (Amazon Kindle) for just $0.99 until May 8th. You can find it here:

You have a lot to offer the reading world, Lisette. Before you go could you say a few words about your Desert Series since you've recently published the third book in the trilogy?

Thank you, Jan. That's a great compliment coming from such a prolific and talented author as yourself.

The Desert Series is a YA Paranormal trilogy, but that's just a label. To more accurately describe it, the Desert Series (Mystical High, Desert Star, and Drawn Apart) takes place in a dying desert town in the Southern California desert called Mystekal. The entire series spans a time frame of six years. While this is a paranormal series, it's more accurately three coming-of-age novels with real-life issues that mix with paranormal elements. I cover many topics in the novels: friendship, divorce, mental illness, bullying, parental abandonment, true love, soulmates, death, and much more.

Thanks so much for being here today, Lisette! It was great having you and you're welcome to come back any time.

Thank you, Jan. You are always the most gracious hostess. Good luck with your newest novels, I'd Rather Be Growing Grapes and Wild Goose Chase.

To follow Lisette Brodey, you can find her here: