Today I'd like to welcome author, Amy Gregory, to my blog with an interview. She comes with great news regarding her Racing to Love series -- she has just released the fourth installment to the series: Eli's Honor. 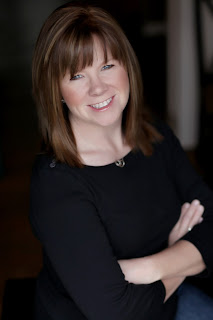 Amy: Oh Jan, it is an honor (no pun intended - I promise!) to visit your blog. I fell in love with your work and pounce each and every time you release a book! Above and beyond that, I'm so proud to have gotten to know you, and call you my friend!
Jan: Thank you so much, Amy! Happy to have you here.
Amy, your Racing to Love series is obviously geared around racing. Can you explain what kind of racing and how this awesome series came about?
There are several types of racing, so great question! This series pertains to dirt bike racing. To give you an idea of what these bikes can do, our son races on the "little bikes" on a KTM 50cc bike. It will top out at about 67mph - for an 8 year old. LOL He's always had a fascination with racing and we've always enjoyed watching the pros race, as well as the freestyle variety where backflips are pretty common!
You have four books in the series: Carter's Treasure, Jesse's Soul, Brody's Love, and Eli's Honor. Are the characters that inspired these books real people? Or characters that came alive in your imagination once you came up with the idea for the series?
These books and events aren't based on anyone, although, there probably is more of me in each of the girls than I'd like to admit. In Eli's Honor, there is a secret that is revealed that leads to the final book in the series - Alex's Destiny, due to release this November.
I will admit freely, I set out with very little in mind when I write. I do prefer to write in a series, so I had each of the characters names, but there is no plotting that I do in advance at all. I start typing, then one scene leads to another twist, and that may bring in a new person and so forth.
What inspired the first book?
Initially, it was due to lack of sleep! My husband travels a fair amount for work and so between tossing and turning, over the course of that week, I kept having this recurring dream, but each night more was vivid, the story more real. I woke and started just sketching it out so I didn't forget it -- to this day I don't know why I did that. I'd never written before so it was just a whim, that when I was finished I had over 400 written pages. I couldn't give up on it and shove it in a drawer. I learned the hard way how to publish and so now here I am.
Are there more stories brewing to continue the series?
The final book in the series is Alex's Destiny. I've been pretty quiet about that book, mainly because of a secret twist to the series. I couldn't answer any questions about it without giving away that big "secret". Everyone asks about my guys, Carter, Jesse, and Eli...well those that have now read Eli's Honor -- are in on it.
I love this family so much, I won't say that I won't revisit them with some short stories, but I will say that there is a certain detective that not only I fell in love with, but I had several requests for more of him. So the series will spin off into my second series -- Finding Perfect. The first book is about Detective Mike Sterling! Yes...He's back ladies and gentlemen. That book will actually release in September, I think.
You lead a very busy life. Do you schedule writing time? What helps you get in the writing zone?
Well, I will admit, this summer has been my "off time" because I require silence to write. So with three kids -- that's impossible. I used to get up at 4:00am and write, but after awhile, my body decided sleep was going to happen one way or another! LOL. I will say, for Christmas last year, my husband gave me a unique gift that I never would have asked for. A really nice set of noise cancelling headphones. So now, when I am taking kids to and from activities and have to stay due to distance, I can sit comfortably in a local Starbucks and the headphones allow me to write during those several hours that were before wasted time.
What is your biggest writing challenge?
Honestly, I am probably my editor's worst nightmare! I can write a story -- no problem! However, everything I learned in school regarding grammar, sentence structure, story structure -- yeah, all of that is gone...I remember nothing.
You've whet our appetites for Eli's Honor. Can you share the blurb and an excerpt?
Happy to! 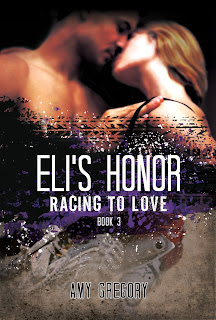 This is one of my favorite scene's from...


LUCKY DUCKS
In two fluid strides Kasen was at the small, round table injecting them with suspicion. "What the hell are you two up to?" Before either could formulate a response, he bit into Riggs. "I know what you're up to." He moved on to Claire.
Before he could zing her, she zinged him. "Riggs and I are having a clandestine affair, you pinhead." She cranked up the volume. "He was about to ring my bell right here in this coffee shop."
Kasen's eyes turned a murky shade of blue.
Riggs threw a blanket on the inevitable fire. "As fun as that sounds, Claire, you might want to rethink the fib." He chuckled and leaned back in his chair. "Kasen will toss me into a wood chipper if I touch the love of his life."
"Love of his life? Ha!" The concept made her tremble but Claire was determined to stay in control. With exaggerated mutiny she slurped an overlarge sip of coffee. Oww! Oww! Oww! The coffee scalded her tongue and possibly gave her taste buds third-degree burns. Foolish and stubborn, she swallowed the coffee and tipped her chin. Her defiance was short-lived when their eyes met again. For a few remarkable seconds she saw beyond the shadowy depths of his anger, and detected...pain?
*If you'd like to experience Claire and Kasen's story, you can find it at:
The Wild Rose Press
Amazon 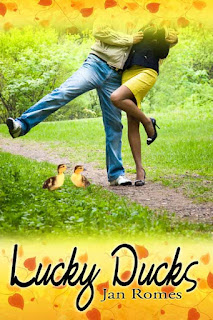 www.authorjanromes.com
Posted by Jan Romes at 6:37 PM No comments: