It's my pleasure to welcome Julie Tetel Andresen to my blog! 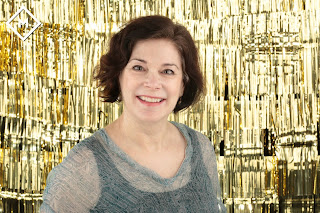 I asked Julie five questions. Before we get to them and to her answers, I wanted to share a bit about this multi-talented author:

Julie loves to travel, and has lived for extended periods in Germany, France, Romania, Vietnam, and Mongolia. As a child, she had a passion for playing the piano, and transferred that passion as an adult into writing romance novels and scholarly books about language. For Julie, writing essays in foreign languages is like playing scales and arpeggios as a warm-up exercise for writing in English.

Now that I've given you a insight into who Julie is, it's interview time.


Your love for the written word and language is apparent in the number of books you've written and also that your day job is a professor of linguistics at Duke University. When did you discover this incredible passion?

My passion for language goes all the way back to when I was five years old. I shared a room with my sister, and at night, when we went to bed, I would tell her all the new words I had made up that day. Then, somewhere along the way, I discovered there were languages with the words already made up, and I thought that was marvelous. I didn't have to invent new words anymore. I could just go learn other languages!

My favorite book as a kid was Dr. Seuss's On Beyond Zebra. I still love different alphabets. The most intriguing is Georgian. Last year when I did an around-the-world trip, I made sure to stop in Tbilisi, Georgia mostly to see the signage in the streets (as well as the Great Caucasus mountains to the east). I wasn't disappointed.


As a multi-genre author, do you find one genre easier to write? Which one is the most difficult?

No genre is easy to write, although I think some authors have good ears for particular ones, such as the Regency, and they stick with that. In my case, I've been eclectic and have made my way through the various subgenres of Romance, tuning my ear to their different melodies.

I liken myself to the Rolling Stones who I've always admired for trying their hand at all the subgenres of rock: anthem, ballad, hard, blues, honky-tonk. They even did disco.

The hardest for me have been paranormals. My three paranormals -- The Blue Hour, The Crimson Hour, and The Emerald Hour -- are intricate, too intricate for some readers. However, those who like them really like them.

My writing style varies with the subgenre I'm writing. My contemporary, DeMarco's Café, is fast-paced, because that's what's required. My first medieval, My Lord Roland, is slow (in a good way, I hope), because the pace of life was very slow back then.

I love comedy. And Heaven Too (set in the 17th century England), and Swept Away (set in 17th century Caribbean) are comedies, and I hope readers get laughs from both.


You've traveled the world and have lived in some exciting places. Have any of those incredible locales become settings for your stories? If so, could you share some examples?

In 2012 I lived for six months in Vietnam. I loved every minute of it. A few months after leaving Saigon, I woke up one day and started writing my Forest Breeze trilogy: Tied Up, Captured, and Knocked Out -- all three set in Saigon. I surprised myself only because I was about to start writing something else when these stories seized me, and that was that. Third, Knocked Out, is new this month, available on Amazon.


If you were to mentor an aspiring author what tips would you offer?

If I were to mentor an aspiring author, I would say, "Honor your vision." This advice is both wonderful and excruciating.

It's wonderful because it gives the aspiring author exactly what he or she needs: encouragement to write the story they want and need to write.

It's excruciating because an author's vision may not coincide with current trends in the marketplace, and so the work might not find a ready audience which can be discouraging. However, writing to trends is a bad idea, because trends change, and it may well change in the direction of what you wanted to write in the first place, while you've been wasting your time and talent on something you didn't have in your heart. So you have to follow your vision whose emotional center is your heart.

In my case, honoring my vision has been wonderful because I have indulged myself in a vast exploration of the Romance genre.

It has also been excruciating because I've known for 20 years that the way to make it in the commercial publishing industry is to establish yourself in a particular genre and to consistently write in that genre.

I sometimes think: "Lucky is the author whose vision matches market trends and whose imagination produces consistent stories a given audience can easily recognize!"

Then I have to remind myself to honor my vision, which just happens to be - for better or for worse - eclectic.


Thank you for being here today, Julie, and for sharing who you are and what you do. I am in awe of your talent and drive, and I wish you continued success in your writing. Please come back again. We'd love to hear more about the great stories you're writing and planning to write. I may never get to the wonderful places you've been and will visit in the future, so I'd be happy to 'visit them vicariously' by having you tell us about your journeys. Until then, take care and keep the creativity flowing.

To learn more about Julie...

Today my guest is Marcia Carrington!

A little bit about Marcia...


Marcia Carrington writes about the human condition, exploring what makes people tick, but in an upbeat and optimistic tone. She is an interested observer of popular culture, and fan of cinema from all eras and countries, especially from the 1930-1970s. Marcia is a long-time soap opera viewer, watching daytime, and night time serials from a very young age.

She's also a food connoisseur, with a particular love of chocolate, and coffee. The morning coffee has always been a staple for Marcia, and something which she cannot do without. There is just something about the fresh aroma of coffee early in the morning, and anytime for that fact, which proves irresistible to her.

Thank you so much Jan for having me on your blog today. I would like to offer your readers and blog followers an excerpt from my new novella, BRANDY’S SUMMER IDOL, which will be released on Smashwords, Barnes and Noble, I-Tunes and Amazon on the 12th August 2015. It is a section from the novella’s second chapter which springboards the action for the remainder of the story. Thank you again for this opportunity.


Brandy had risen from the bed, and was walking around the bedroom listlessly. She heard what was going on downstairs, and went to check from her balcony. Brandy peered down, sighting Garth with Ryan, seeing him shirtless, and her eyes widened. She took in Ryan’s blond hair, tight body, the slow but sensual way he did things, and was spellbound by him. Brandy looked away for a moment, thinking she was seeing things, and again took a peek at Ryan. Her eyes ran all over him, and she studied him carefully. She had never seen anyone so handsome, so rugged, and this triggered something inside of her, something she had never felt before. There were great-looking guys in high school, but they were nothing compared to the man she was ravishing with her eyes at the moment. Ryan had now completed his job, and grinned at Garth.
“Can you start the car?” Ryan said, leaning on the front of the car.
“Sure,” Garth said, moving into the driver’s seat, and turning on the ignition. The roar of the engine pleased Garth, and he smiled with happiness. Ryan closed the hood, and approached the driver’s side of the car.
“Looks like it’s okay, but reverse it, and then run it in drive,” Ryan said. Garth nodded, with Ryan backing away from the car, and did as he said. The car was again working, and Garth breathed a sigh of relief as he exited the car, closing the door.
“Thanks Ryan.”
“No trouble,” Ryan said, with a subtle smile.
At this point, Ryan could sense he was being watched from somewhere, but the vibe he was receiving was not a negative one. He peered off into the houses opposite to see whether it was emanating from there, but there was no one around in those homes. Seeing this, Ryan knew it must have been coming from behind him, and turned around. When he did, Ryan noticed Brandy observing him from the balcony, and their eyes connected. Brandy shyly looked away from him, but as she turned back to Ryan, threw him a sly smile, as he did the same. Garth saw what had transpired, and chuckled.
“That’s my daughter, Brandy.” Ryan and Brandy continued looking at each other, which Garth witnessed with bemusement. Ryan was hooked on watching Brandy, as was she, and they could not stop their exchange. This was interrupted by a loud voice which appeared to originate from Brandy’s bedroom.
“Brandy, answer me…” It was Agnes, and she had entered Brandy’s room. She was absolutely chilled to see the eye play between Ryan and Brandy, and her face filled with horror. “Come inside right now young lady,” Agnes said, as Brandy reluctantly left her perch, and smiled solemnly at Ryan. Ryan turned back to Garth, with an expression of confusion.
*

A snippet from NO SWEAT PANTS ALLOWED - WINE CLUB!


No Sweat Pants Allowed - Wine Club
"I scoffed when Corbett jabbed me about turning forty. I was fearless and ready to embrace  my prime. 'Bring it on' I'd said. I swear at the stroke of midnight on my fortieth some crusty old goat sprinkled me with geriatric dust and my eyesight blurred."
~ Stephanie Samuels 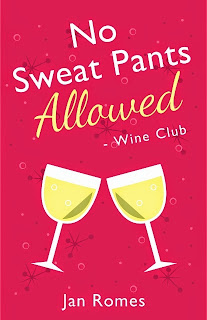