Molly Williams is a stressed-out, over-worked aide to a divorce lawyer. She's dealt with people suffering from heartache and irreconcilable differences for so long it's jaded her outlook on relationships. And it's doubtful she'll ever find love because she's afraid to put herself out there.

When her boss takes a sudden leave of absence from the law firm, she's gifted with three-months off with pay to do whatever she wants. A friend talks her into stumping as an assistant to country-rock star, Finn Riley. Thinking this gig will be a walk in the park compared to what she's been doing, she's shocked to find the opposite.

Finn is a self-proclaimed heartless bastard who's about to embark on a summer concert tour. He fights the idea of an assistant but gives into the relentless nagging of his agent, and hires Molly.

Molly is star-struck when she meets Finn, but it's short-lived. Finn rubs her the wrong way and the chaos begins. Molly is flighty, a hard worker, and in no mood to put up with someone who doesn't want her there.

Finn discovers Molly's edge of sarcasm and sense of humor right away. He likes both, but doesn't like that he does. She's a giant distraction and he thinks the only way to get into the zone he needs to be in, is to let her go. The adventure of Finn and Molly is an uphill climb that looks as though they'll never get to the top. In three days, anything that could go wrong...did!

Finn and Molly will make you laugh, want to knock their heads together at times, and root for them to get their happily-ever-after! 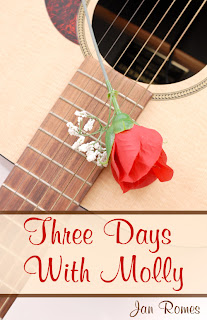