Julie Tetel Andresen and her process for Buy Me Love 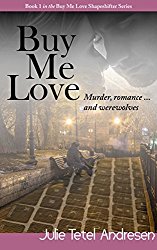 If you read Buy Me Love (2017), my latest full-length romance (80,000 words), you will see the outside of the dress I have sewn. In this post I want to turn the dress inside out and show you its seams. Writers and readers alike may enjoy learning about my process.

A couple of years ago I decided to tackle a shape-shifter trilogy. My first step was to write out a short story/novella in order to set up the world, and I came up with The Alpha's Edge. This story is set in contemporary London, revolves around the powerful Hanover werewolf pack and links the central romance to a murder mystery. I liked getting things going in a shorter form - like first staging a play off Broadway.

For Book One of the trilogy I wanted to cross a British police procedural with a werewolf story, thereby continuing the world set up in The Alpha's Edge. Because one of the plots was going to involve online dating scams, I chose the working title Buy Me Love. In the end I kept the title, which doesn't always happen.

2. Before Writing the First Word

* the story would be set in contemporary London

* my hero, Moses Riley, would be a Detective Chief Inspector at Scotland Yard, a division of the Metropolitan Police

* my heroine, Zelda Hanover, would be a Guardian in the Hanover werewolf pack

* the solving of the murder would be absurdly difficult

* this was as much as I honestly knew

Now I had to think up a dead body set-up that would be difficult to solve. For the murder scene, I chose a part of London I already knew, namely Russell Square in Bloomsbury. It's a lovely little park, shady in summer, and full of benches and children romping in the central fountain. 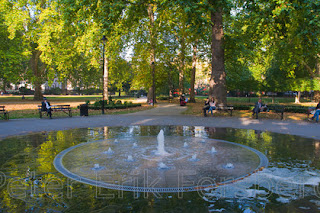 I created a dead body that was rigged to look like a man on a park bench reading a newspaper. This set-up made the murder extremely difficult to solve because no one noticed the man was dead until one Tuesday afternoon, which meant that he had to have been rigged sometime during the night on Monday, hours before any investigation would be opened.

About the dead body itself, here are my notes: I wanted the least identifiable corpse possible: no jewelry or identifying marks like scars or tattoos. The victim's fingerprints had been filed off, and he was dressed in clothes that weren't his, thereby leaving no personal clues. His teeth were intact, but not knowing the victim's name or even his nationality, they weren't much help except to note that their quality was "American," although this didn't necessarily mean he was American. All DCI Moses Riley and his team had to go on was that the dead man was likely in his thirties and had no defensive wounds, which meant the victim probably knew the killer.

Because Zelda, a werewolf, was going to be involved, I figured the solving of the murder would have to involve the sense of smell. So I deliberately put the dead boy out in the open where it would be discovered after many hours, when smells associated with the crime would have dissipated. Otherwise Zelda could have gone up to the dead body, taken a good sniff and figured out a lot about both the killer and his victim.

At the beginning, I had zero idea how this murder was going to be solved. This is the whole point of writing: to find out how whatever happens happened.

READING: I read obsessively in any case. In this case, I read British police procedurals, easily 40 if not 50 in order to get a sense of how other authors understand the genre. In particular I loved the work of Oliver Tidy and Cynthia Harrod-Eagles. It's hard to say how they influenced my work, but I'm sure they did.

I also researched Scotland Yard, the Metropolitan Police and anything and everything I thought I needed to know to write a convincing British police procedural.

As any writer knows - historical or contemporary - you use maybe 10% of your research, but as you're researching you don't know in advance which 10% it's going to be.

ON LOCATION:  I had the opportunity to go to London for five days in August 2016. I already knew I would use Russell Square for the main murder, but I wanted to review the location. So I stayed at the Grange White Hall on Montague Street, where I had been on a previous trip. It's less than 100 yards from Russell Square. 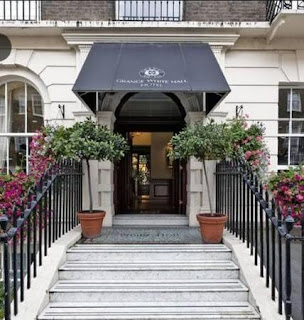 The Grange White Hall, 2 - 5 Montague Street - near the headquarters I chose for the Hanover pack in The Alpha's Edge.

I did such an extensive walking tour of London, picking out the locations for various events and where my characters were going to live, that on the fourth day, the second and third toes on my left foot began to go numb. On the fifth day, I had to sit in my hotel room with my foot propped up on a pillow. All I could do was review my notes.

Here are some of them: 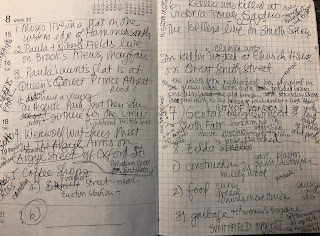 Before DCI Riley confronts the difficult Russell Square park bench murder, I wanted to show him in action, solving an easier case. It is #6 on my list, above.

I set up Zelda's sharp sense of smell by describing what she encounters on a walk through London. It is #8 on my list, above.

I know that writers can convincingly evoke a setting they have never been to or have not been to in a long time (think of science fiction and fantasy writers creating their own worlds). However, I find it a wonderful privilege to be able to physically scout out a location I'm writing about. I never know what I'll come across.

On the first evening in London, I happened upon this image of the London Eye above the Horse Guards across the street from St. James's Park: 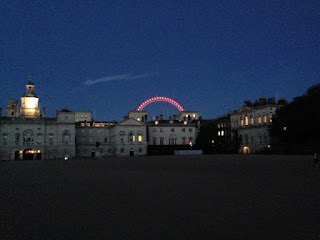 I stood there long enough to come up with this passage for the book:

"Across the street on their right, after two elegant blocks of Government Offices, the Horse Guards came into view. Against the sky already turned midnight blue and above the roof of the working stables, the half-arc of the London Eye, miniaturized by distance, formed a maraschino rainbow, each tiny car an exquisite cherry."

5. Imagining One Scene After The Next

Now to the writing.

I like structure, and I like to keep myself on track by blocking things out as I go. What you see below, is the finished product. When I began, I had a nearly blank page with only one tick for Chapter 1 on the far left-hand side, and I originally imagined it from DCI Riley's POV: he's the M. But then you can see I scratched him out and reframed Chapter 1 from Susie's POV. 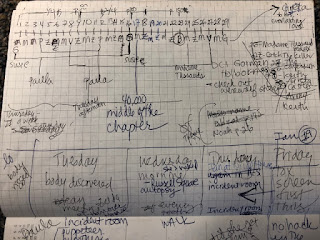 where you can download a free copy of The Alpha's Edge. 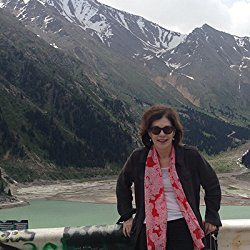