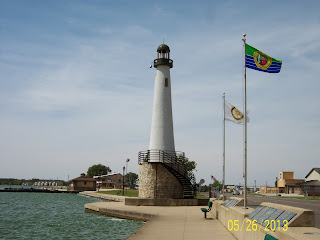 Lighthouse at the northwest corner of Grand Lake St. Mary's
(located in Celina, Ohio)
When I was a kid my parents would occasionally take us to Grand Lake St. Mary's for a day of swimming and fun. Those were special times etched forever in my memory. I was fortunate to get reacquainted with the lake the past two summers and I felt the same magic I did back then. I've fallen in love with the lake all over again.
There is something calming about rippling waves that crash into the shoreline. It's hypnotizing and romantic. Imagine a hot summer morning, a cup of coffee and the sun rising above the water, or a campfire under a starry sky with the sound of water slapping the rocks. 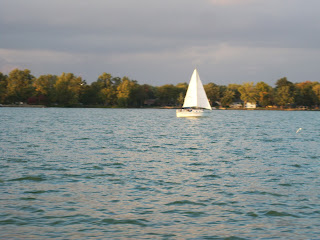 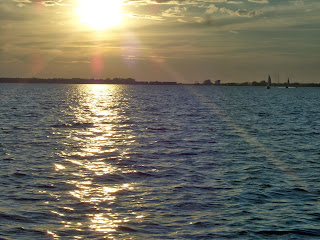 Last autumn, I walked through the campground on the south side of the lake, admiring the reds, oranges and yellows of changing leaves and a story popped into my head. I pictured two people who needed to get away from the grunge going on in their lives. They each chose the privacy of a cabin on Grand Lake in the off-season to try to regroup. With months of quiet solitude they would heal from their mistakes and chart their futures. Neither one wanted to be bothered.
Introducing: Libby Griffin and Maxwell August.
Here is their story:
Fashion designer Libby Griffin has had the week from hell--terminated from her job and heart-wrenching news from the doctor. Hoping for time alone to regroup, Libby rents a cabin on Grand Lake St. Mary's for five months. Right away she meets the most irritating man on the planet, who also happens to be drop-dead delicious.

Recently divorced author Maxwell August has a book due, and his muse has gone into hiding. With a chip on his shoulder, his writing in stuck-mode, he heads to the lake only to encounter a monumental distraction with blonde hair and hazel eyes.

Will these two right-brainers allow the off-the-charts attraction brewing between them to grow? Or deny it to focus on the things they think are more important and miss a chance at forever? 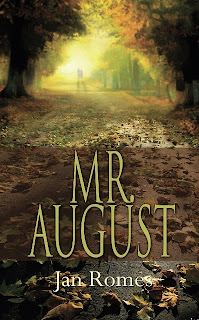 Amazon
Excerpt:
"Watch what you're doing." Mr. August still looked like he wanted to bite her head off.
Libby squared her shoulders. "I was here first." He'd shooed her away twenty minutes ago and was trying to do it again in the grocery. She matched him frown for frown.
"Maybe so, but you can't stand there for ten minutes reading the side of the carton."
"I can take as long as I need." She'd only been there a minute or two. Clearly the man had no concept of time.
"You're holding everyone up."
Libby looked around. There was no one else waiting for her to move. She took a half-step away from the juice and motioned for him to go at it.
"Seriously?" He crossed his arms at his chest.
How much room did he need? Libby stayed exactly where she was and they engaged in a childish game of who would blink first. In the span of those few seconds, her subconscious filtered more information. Actually, it poked her hard enough to make her the first to blink -- while this guy was a giant pain, he had a voice that was part gravel, part silk. She'd missed it when they spoke at the cabin, now it was all she could focus on; well, that and his scent. Libby tried not to breathe him in. His musky fragrance floated in front of her nose until she had no choice but to take a few whiffs.
A momentary look of amusement raced across his features, like he knew she was taking stock of him. A low growl formed in the pit of Libby's stomach and she was close to hitting him with her cart. "Are you stalking me?" Oh my God, she didn't say that, did she?
Maxwell narrowed his eyes so tight they almost closed. "You wish."
** If you would like to experience the romance, conflict and adventure of Max and Libby at Grand Lake St. Mary's, you can find it on Amazon .
May your days be filled with joy and romance and special places that bring you peace!
﻿
~ Jan
﻿
Posted by Jan Romes at 12:18 PM 2 comments:

Prompted by love, guilt and desire to own their own business, the Dawson triplets enter into a contract that will change their lives forever!


(Coming soon to an e-reader near you!) 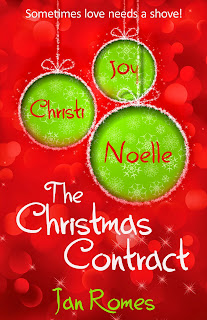 Cover art by: Tugboat Design
Posted by Jan Romes at 6:31 AM 1 comment: