*Pauses while you either frown, crack up laughing, or raise an intrigued eyebrow* 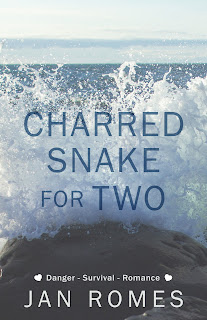 The working title had been:  Survive with Me. It didn't excite me, so I changed it to Just Us. Still not enthused, I held onto Just Us until almost the very end. When I was tweaking the last scene, it hit me -- Charred Snake for Two. As bizarre and out of the norm as it sounds, I had no choice but to embrace it.

I bounced the new title off my husband. He gave me squinty eyes and a half-smile. I laughed and told him it would grow on him. (First, it had to grow on me...lol)

Then I put the name out to social media. I didn't get much reaction from my Twitter tweeps. My Facebook friends, however, weighed in with a few comments. The overall sentiment: romance and snake didn't go well together.

The story, I'll admit, is creative madness. And it needed an equally mad title.

Unable to get her head and heart back on track after her marriage crumbled, Alexandra Henry signed up to take part in an expensive, radical self-help, self-esteem program that would put her on a secluded island for seven days with someone just as broken. Together they would team-up to survive, renew trust in the opposite sex, and grow mentally stronger through candid conversation, while taking on nature at the same time.

How could someone like him know about heartache? Hope fizzled on the spot. She wouldn't come out of the experience any better than when she went in. Or would she?


I hope you'll take a chance on this uncharacteristic madness! If so, you can find it here:

Any and all feedback (good or bad) will be welcomed! Even if it's - 'What was she thinking?'

www.authorjanromes.com
Posted by Jan Romes at 6:51 AM No comments: